Regional currency, self-created, for all regions

Translations of this page:

Minuto is an incredibly simple concept at its core. However, it is sometimes quite tedious to integrate it into our complex business world with taxes etc, so that you don't get any legal problems and that beginners feel motivated to use Minuto. Therefore, in practice, we need ideas that are easy to implement and compliant with current laws.

A simple, legally compliant option is to create an extra Minuto cash box, which results in a number of simplifications and opportunities in practice. With a Minuto cash box, the Minuto runs virtually parallel to the official currency and remains almost invisible. For the most part, questions regarding taxation, etc are almost self-evident.

How to set up a cash box 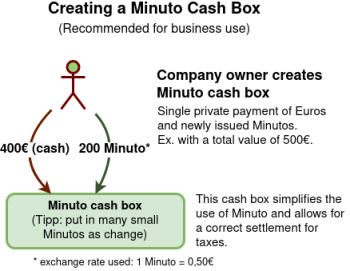 As a freelancer you can use the Minuto cash box as follows:

You as a private person create an extra cash box in which you put:

Income with a Minuto cash box 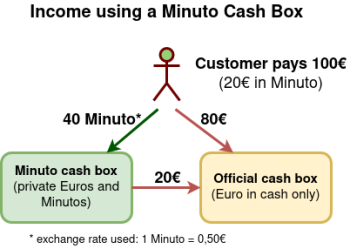 Expenses with a Minuto cash box The Minutos go to the salesman who accepts them and the appropriate Euros go to the Minuto cash box, so that the company's cash has 100 Euro less.

In the accounting appears the amount in Euro and the payment in Minuto is completely transparent. Accordinly, the salesman puts the Minutos into the Minuto cash box, etc. Payming an invoice with a share of Minutos by bank transfer

Payment of the Minuto share is then made later, simply by exchanging Minuto and Euros using the Minuto cash box. Even though this makes Minuto almost invisible, all the advantages of a regional currency still unfold. 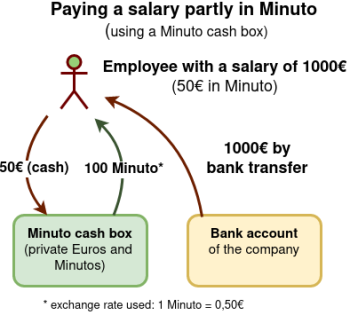 Payment of a salaray partly in Minutos

Over time, since Minuto accumulate in the Minuto cash box, sufficient expenses in Minutos are needed to fill the cash box up with the official currency. Another way to do this is to have employees supporting Minutos and accepting a share of their wages in Minuto.

The salary is transferred in full as usual and the employee voluntarily exchanges a small amount of Euros into Minuto once a month. So in the example, he takes 50 Euro from his private money and gets 100 Minuto from the Minuto cash box.

For editors and translators: You can download and edit these diagrams from our translate page.

Except where otherwise noted, content on this wiki is licensed under the following license: Lizenz Freie Kunst 1.1
Original Projekt: www.minutocash.org - Datenschutz - Impressum