Regional currency, self-created, for all regions

Translations of this page:

Significance and impact of complementary currencies

What makes complementary currencies so significant? What is special about Minuto? What positive effects does it have? These and other questions are addressed here.

What makes complementary currencies so significant? 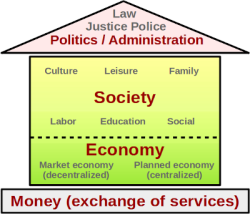 Money is the foundation on which our society or our order is built.
Our current monetary foundation is unstable and inevitably leads to crises in all areas of society.

Human life consists largely of exchange with other people. Money has established itself as a means of exchange for a fair exchange of services. Money is therefore of fundamental importance for the structure of our society. In the picture, money is depicted as the foundation on which the house of our society is built.

Our current monetary system has grown historically and is outdated. It is totally unsuitable for modern societies striving for freedom and true prosperity. A central monopolistic money system, as we use it today, serves to dominate people and consolidate the power of the rulers. Therefore, today's money has the property to concentrate in a few hands and to impoverish the masses and this until the system has to collapse after a few decades.

The foundation on which our society stands is therefore completely unstable and almost all our major social crises and problems can be derived from it or it leads exactly to these. (Wars, poverty, economic crises, environmental destruction, corruption, greed, exploitation …).

The solution would be of course to change this monetary system, but we are faced with the dilemma that those who have influence and power benefit from this system and therefore will not change it.

However, there is hope that it can be done from below, because the main problem of the current monetary system is only the monopoly. That is, the problems solve themselves as if by magic if people simply use several means of payment. Since it is not implemented by law, i.e. coercion from above, this can only happen voluntarily and it simply needs pioneers who simply put new ideas like Minuto into practice and try them out. Why the idea behind Minuto is exactly suited for such a path is explained in the following lines.

If extra money really brings such a positive change, then many people think that politics must decide this. However, this is not the case with Minuto. Here, people can simply decide freely to use an additional means of payment. Minuto is therefore just a basic idea or guide to action, like free software, which simply needs to be applied and implemented and, if necessary, can be supplemented with new ideas for implementation. In practice, this means that people just need to get started. True to the motto “Be the change you want to see in the world”.

From the history it is well-known (e.g. Wörgl experiment) that new means of payment are accepted only timidly by humans. However, if the principle were understood and the own advantages become evident, humans will use this quite fast for itself. The concept of Minuto can easily be started in one region on a small scale and there the many advantages of a regional currency can come into effect. Other neighboring regions can more easily join and benefit from the already established region. Newly created Minuto in the neighboring regions support and strengthen additionally the already established region. In this way, an ever larger network is created which can also grow supraregionally. However, each region can benefit from the advantages of a regional currency, since the Minuto have the greatest acceptance only in the region in which they were created.

This is one of the fascinating features of Minuto, that the concept can be used supra-regionally and everywhere and yet the individual Minuto bills have the advantages and effect of a regional currency.

For the individual, the use of Minuto is only an inconspicuous small change, but in the aggregate, in cooperation with many people, it has many positive effects. In practice, it takes only a few people who actively decide to create and circulate Minuto, and the greater part need only accept and use it.
People can continue to live as usual and use Minuto to their advantage. However, just by minimally changing the habit that Minuto can only be spent specifically in the region, the many positive effects will result in the aggregate.

Since Minuto is created by individuals themselves and is backed only by their labor, the concept is completely independent of the established currency. In practice, this has the significant main advantage that a Minuto does not first have to be exchanged from the existing currency, which is usually in short supply. Instead, the minuto can be created wherever it is needed for a fair exchange of services.
However, despite this independence, it can also be used in the normal business world with an appropriate conversion rate. ( current recommendation 1 Minuto = 50 Cent ) Another advantage of this is that in times of crisis (deflation, inflation of the normal currency) people have access to another stable means of payment, which can significantly cushion the dramatic effects of a currency crisis and the resulting economic crisis.

To start Minuto in your own region, all you need is a few like-minded people who can try it out with relatively little effort. In contrast to previous regional currencies, which are managed centrally, this means much less administrative work and the elimination of a lot of bureaucratic red tape.
Decentralization also means that there is no central responsible body. Those who create and circulate Minuto are mainly responsible for their own Minuto bills. The remaining people who accept Minuto bills only have to decide on their own responsibility at the time of acceptance whether to accept the respective voucher for the respective exchange of services. Since there is no central responsible authority, everyone can support the idea themselves with more or less initiative.

Positive effects on almost all areas of life

Since money is the basis on which almost all social structures and systems are built, changing the basic properties of money also means fundamentally changing all these structures. An additional free means of payment like Minuto leads to:

We are problem and solution at the same time

The idea behind Minuto is a very powerful way to achieve fundamental positive changes in our society in a very peaceful way. However, an idea is only as good as the people who are willing to implement it.
So far we are used to handing over responsibility for basic things to politics, hoping for change and then complaining when it doesn't work. The current crises are a crisis of consciousness. If enough people become aware that everyone can only change themselves and enough people consciously change their previous habits, then these many small changes can lead us to a whole other world of true prosperity, peace and happiness.

Except where otherwise noted, content on this wiki is licensed under the following license: Lizenz Freie Kunst 1.1
Original Projekt: www.minutocash.org - Datenschutz - Impressum